Kindle special today! THE UNQUIET is available today for $2.99.

THE UNQUIET on Kindle

I don't often post reviews (I'm not sure why I don't...I just don't) but I really loved this one from Cynthia on Goodreads:

"I love a really great ghost story. I’m a fan of those where the author is not afraid to kill off a couple of characters and The Unquiet definitely surpassed my expectations. It was more of a thriller than a ghost story as we don’t really see a ghost in the story through most of it but crazy things begin to happen from the start after Rinn moves into town. It’s definitely not one you should be reading at night before going to sleep, I started thinking I could hear creaking noises and seeing shadows on the wall.

"The creepiness of the story seeps out and will give you chills. I love stories like that, ones that will get so descriptive, where the main character herself can’t tell the difference between reality and imagination so the reader doesn’t even know what’s real or not.

I hope my current NaNo project is equally creepy. Better yet, creepier.

I'm addicted to creepy. And speaking of creepy, this came in the mail:

So hopefully I'll learn how to do something about this poor girl's head: 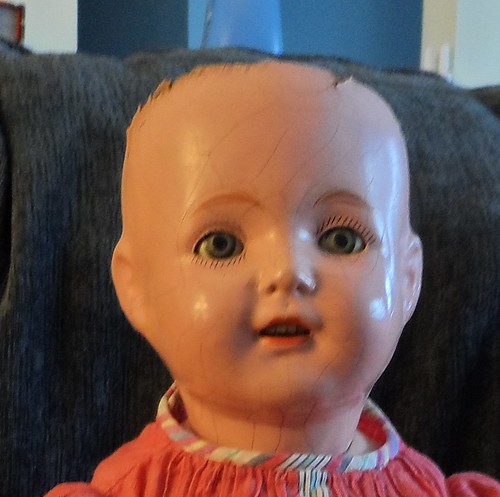 Author FRIGHT FEST from Winter Haven Books! (Scroll down for my contribution)

So it's Halloween--and all my scares will be at work tonight, lol.

Check out my fun Halloween interview with Rachel over at Beauty and the Bookshelf and some other GREAT author interviews as well!


Then stare at this for 10 seconds and tell me if your head explodes:

Dayna, a Canadian book blogger over at A TAPESTRY OF WORDS graciously invited me to do a guest post for PSYCHTEMBER, a month-long blog even that focuses on mental health issues in YA novels. Dayna herself has a Bachelor's degree in psychology. This event includes not only book reviews, but also guest posts and interviews with various YA authors including Adele Griffin, R. J. Anderson, Janet Ruth Young, Jackie Morse Kessler, Jennifer Brown, Trish Doller, Tabitha Suzuma, and Susan Vaught. If you love psych and YA, check it out. :-)

And here's my guest post: TEENS, BIPOLAR, AND A VERY DIFFERENT GHOST STORY.

Thanks, Dayna, for inviting me to participate. :)

Anyone in the Youngstown, Ohio area? I'll be signing copies of THE UNQUIET at:

I hope to see some of you there!

1. It started out as a NANO novel in 2005, which means it technically took me over 5 years to write story (though more like 1 1/2 once I really got into it).

2. The first 50,000 words were written for adults, not YA. Yep, with sex scenes and everything.

The MC was Liza, a has-been journalist who escaped to River Hills after a scandal that ruined her career. Her love interest was Sam, her landlord. Sam had a weird little daughter whose name was changed so many times I can't remember it now. Liza took a job teaching English at River Hills High which was haunted by the spirit of a dead girl named Delilah.

After my first YA book was published, I decided to switch genres. Liza became Monica, Sam became Luke, and the spooky little kid switched parents and not only became Rinn, but my MC. Delilah changed names about a dozen times, too, and ended up as Annabeth--but when a new novel with a character with that very same name came out (what were THOSE chances?!) I did a "find and replace" and turned "beth" into "liese."

3. The title was originally "Unearthly Possessions" but was changed to THE UNQUIET to avoid confusion with two new YA novels with similar titles.

4. "Nate" was a placeholder. He'd also gone through a variety of names, but I wasn't able to settle on one that truly fit (he was actually "Rory" for a long time till I came across a novel that had both a Rory and a Corinne. Again, weird coincidence).

So I used "Nate"--my son's name (yeah, he was thrilled about that, lol)--and then never got around to christening him something else. The name, I've decided, totally fits the character.

5. If you haven't figured it out yet, I do change a lot of names in the writing process. Lacy, Meg, Tasha, Millie, and Luke all had different names at one time or another. The only name I was absolutely certain of right from the beginning was Corinne (after my hairdresser's daughter) and Dino. Dino named himself. I swear.

6. The characters of Norm Solomon, Stacy Winkler, and Pat Schmidt were all named after real people. Rinn's last name, Jacobs, is from a family doctor. Mr. Lipford, the art teacher, was named for a co-worker. If you ever want me to throw your name into a book, just let me know. :)

7. There was a fourth friend of Rinn's, a girl named Alicia, but she was edited out. So was Rinn's boyfriend, Kyle, who was one of the reasons she and her mom moved to River Hills--to get away from his bad ass. The book is 400 pages long. I would have had to add another 100 pages if I'd kept these two in.

8. Rinn kept a dream diary of all her crazy dreams, and excerpts were included throughout the book. Also edited out. Thank God for agents and editors who aren't afraid to tell you what makes the story really draaaaaaag.... :)

9. The tunnel and the pool at River Hills HS actually existed in a school I attended myself. I discuss this in the back of the book. I know the school is still there. I doubt the tunnel is.

10. I really, really, really want to do a sequel--but this is not entirely up to me. So if anyone wants to send out some positive vibes, I won't discourage you!

Congratulations to RACHEL DOMINGO and NICOLE HANSON who each won a signed copy of THE UNQUIET on GOODREADS!

Thanks for entering and I hope you enjoy the book! :)

After being knocked off the internet for a day because of my computer "forget" how to work (how the HECK does that happen anyway?) I can now post that my book signing for THE UNQUIET was a great success. :)

My biggest mistake was not springing for a better camera after my two nice ones mysteriously disappeared. TOTALLY disappeared, as in they-are-absolutely-nowhere-to-be-found-in-spite-of-my-tearing-up-the-house-multiple-times.Yes, ghosts do move things, don't they? Instead of springing for a decent, I bought a crummy Vivitar for around $30 and, sadly, I'm paying a much higher price with pictures like this--

...the book store was small, and quite crowded (above) so we moved next door to Vero Bistro which turned out to be even more crowded that the book store (their gelato, however, is to die for!). And the folks eating pizza seemed somewhat stunned when they realized they'd ended up in the middle of an author appearance.

And, once again, I was presented with some beautiful flowers by my best-ever nephew, Cory (pictured with mom Mary and little sis Rowan). xox

Thanks to everyone who came!

CONGRATS and thanks for the tweets! I'll be contacting you.

Thank you to everyone who participated!
Collapse